Check out our online reviews. Our customers say it best (-:

Our Commitment To You 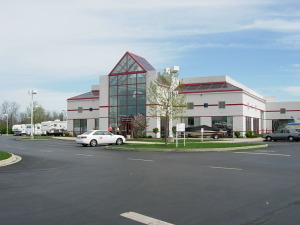 The year was 1992 when Dave Arbogast purchased Wampler Buick-Pontiac-GMC, located off County Road 25A in Troy, Ohio. Within the first year of operation, it became apparent the original facility and its location was simply too small to accommodate what Mr. Arbogast wanted for the future for the dealership. The following year, he purchased and additional 35 acres of land located at the corner of 25-A and Interstate 75, and began working with GM on plans for building a brand new, state-of-the-art facility.

The new facility would become a prototype dealership for GM. Hundreds of other dealerships would later be modeled after it. In October of 1994, a ribbon cutting ceremony was held and the new car building of the dealership that we all know today was opened for business! Shortly after, the pre-owned vehicles building was constructed and later, in 2004, the RV and boat depot facility was added.

The foundation of Dave Arbogast Buick, Pontiac, GMC Truck Inc. is based on customer satisfaction. It is for this reason that the dealership has experienced such growth and success throughout the years. From selling new and used vehicles, to expanding into the conversion van market, to later adding divisions in RV’s, travel trailers, fifth-wheels, and watercraft; the growth and expansion has been astounding. Arbogast has been honored with awards from every product and manufacturer they carry, and has become an industry leader in every market. To this day, Arbogast attributes such success back to the foundation that was established from the very beginning, offering outstanding customer service.

There are thousands of dealerships nationwide, offering at least one (if not more) of the same products found at Dave Arbogast. With that said, how many of those are able to show them all at one location? How many have received awards from them all?

Arbogast is proud to provide a “hometown” feeling which our customers have come to know and love. And now, we’ve brought the “hometown” feeling to the world via the Internet. It doesn’t matter if live right around the corner or a thousand miles away, we want you to feel like part of the family and we will do everything we can to accomplish this. With the ability to offer pick-up at your convenience, and worldwide delivery, we are confident we can accommodate any customer’s needs.

After all, at Arbogast all of our vehicles are “Driven to Satisfaction.”